Once again proved, you have to do hardworking becoming successful in the life. which eventually pay off you one day. After clinching the gold medal by the Indian new Javelin superstar Neeraj Chopra at Tokyo Olympics 2020.
Sumit Antil won gold medal for India at Tokyo Paralympic 2020 in Javelin.
He threw the javelin to 68.85 m (World Record), which was his best in international level so far and enough for winning gold to his name.
When Reporter ask him on his record winning throw, He said “No, I can do better than this, I can throw Javelin over 70 to 75 m for sure”. He shows really incredible confidence on his ability which eventually help India to win more gold medals in future.
In the same event of Javelin, Australia won Silver, Sri Lanka won bronze medal and fourth spot name to Indian athletics.
He could have won bronze if his throw would have little better. Great performance by Indian athletics overall. India won 5 medal in one day in different events.
Sumit Antil is 23 year old comes from Sonepat, Haryana. He was involved with fatal accident in 2015 due to this he lost his one leg below knee when he was just 17. After such a tragedy Sumit Antil didn’t stop. He motivated himself and went for training in Delhi. And rest is history.
He holds great records on national level. If we compare him with recent summer Olympic javelin thrown event he performed well than 2nd 3rd rank athletics in National level. 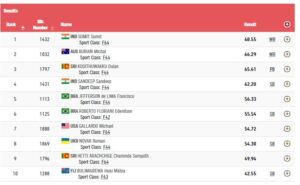 Gold Medal in shooting
One more gold medal to India in 10m air rifle shooting event by Avanti Lekhara. She is the first Indian, who won gold medal at Paralympic in shooting event.
India’s rank is 26 as of now in medal tally, China leads 1st with 119 medal including 54 Gold medal. USA is down in medals tally with 4th rank (49 medals), Great Britain is on 2nd then Russian federation is on 3rd.
Paralympic is going to close on 5 Sep, So India can clinch many medal in row till 5 Sep. Many events is yet to be played, India could be finished in Top 20. These could be India’s better performance than summer Olympics 2020 if finish to top 20. India’s rank in summer Olympic 2020 was 48, which is better than last two Olympics.
Only India and Sri Lanka is leading among South Asian countries. Sri Lanka won one gold medal and one silver. Bangladesh, Pakistan is no where in list nor in Olympics neither in Paralympic 2020. Sumit Antil won medal in (F64 category) in Javelin and broke 3 times world record.

Freshermint intensify the youths for better career and life, We not only love to provide free information but also provide latest mock test. Our mission is to reach out to million of peoples who are just finding better and reliable place for genuine information and education.